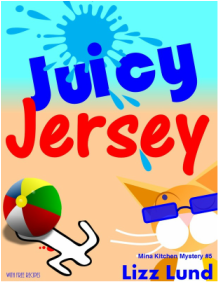 Summertime, and the living is umm--not as easy as Mina had hoped. But, she finally has a full-time job, working alongside her new boyfriend, Jack (that is, Chef Jacque, when they’re at Squirrel Run Acres.) That’s good, right? Except that poor Mina and Jack have been working together a lot lately--specifically fourteen hour shifts in a sizzling kitchen--for months.

When tempers flare hotter than fat on a fire, Jack steps up and splurges for a romantic get-away to Cape May Point, New Jersey. All is forgiven and soon Sunset Beach winks from the distance, until Mina’s stuck with dog sitting duties for Jim, her buddy Bauser’s three-legged dog. Complicating the canine conundrum is Bauser’s last minute plea to deliver Jim to a client location, in Bumville, New Jersey. No biggie, except that Bumville lies in the polar opposite direction from Cape May. And Vito and Miriam also happen to be visiting the client--who is none other than Vito’s niece, Helena Pryzchntchynzski. Oy.

Further jeopardizing their journey through Jersey is Jim’s discovery of Babette Bernstein. Her murder launches a connect-the-dots of corpses that ripples dangerously around Mina and Jack. Oh--and the kidnappings, plural--are a little scary, too.

Will Mina and Jack escape the bad guys? Will they survive their first vacation together? More importantly, will they finally have one?

If you're in the mood for funny fiction, a cast of chatty pets, and unsolved murders--read on. Juicy Jersey packs a roller coaster ride of murders, mayhem and mojitos. Come root for Mina, boo the bad guys and nibble a nosh, courtesy of the author’s recipes in the back of the book, vetted by Lund’s real-life favorite chef, her husband, Chef Andrew.
Buy Perfectly Pickled 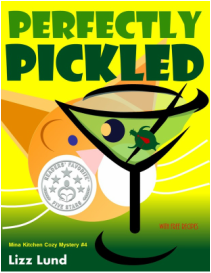 Perfectly Pickled ﻿﻿(Book 4 of the Mina Kitchen series + free recipes!)
Spring is here--finally--and things are looking up! Our intrepid hero, Mina Kitchen, has a new car. Well--it’s new to her. And she even has a boyfriend or two lined up. But that’s because her BFF, Trixie, signed her up on Cupidsbow.com behind her back. Some prospective dates appear a bit odd--but never mind; it’s good to make new friends, right?

But all hope of smooth sailing vanishes when Mina hits another bump in the road: she loses her part-time job at Chi-Chi’s cosmetic counter. And Chef Jack hasn’t been scheduling her at Squirrel Run Acres lately, and her catering for James’ massage gigs are replaced by a new, full-time (and gorgeous) assistant. WTH?

To make matters worse, her financial calamities become outnumbered by the steady stream of corpses floating her way. Never mind the dead bodies pouring forth from her aunt’s church, St. Bart’s Episcopal--they’re experiencing a new take on mass exodus. Congregation members are trading up at the Pearly Gates quicker than a greased geezer through a glass casket--that is to say, they’re dropping like flies.

The grim mortgage reaper looms, when suddenly Mina’s solvency is rescued as she stumbles upon a full-time job. A rather peculiar job, with some definitely peculiar co-workers. Who try to kill her--and Chef Jack.

Can Mina finally climb out of her proverbial--and literal--holes? Or will she wind up getting backhoed alongside a maniacal murderer? And where the heck’s a Lavender Cosmo when you really need one?

​Vinnie, her mini mountain lion-sized cat insists everything will turn out fine--but his idea of fine usually revolves around cans of Finicky Fare, and not much else.
If you're looking for funny novels, chatty animals (in the guise of pets)--and recipes--read this book.Perfectly Pickled packs sit-com humor with stand-up dialogue, a murder mystery and suspense! You’ll cheer for Mina; hiss at the bad guys and sip your very own Lavender Cosmo along the way, courtesy of the author--the recipe’s in the back of the book, along with others, all vetted by Lund’s real-life favorite caterer, her husband, Chef Andrew.
Buy Kitchen Addiction! Recipes
Buy Christmas Bizarre
Buy Bundle #1 - Twice the Fun
Buy Kitchen Addiction!